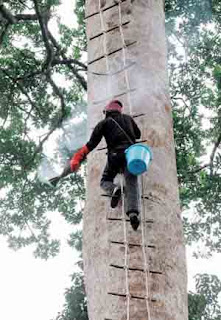 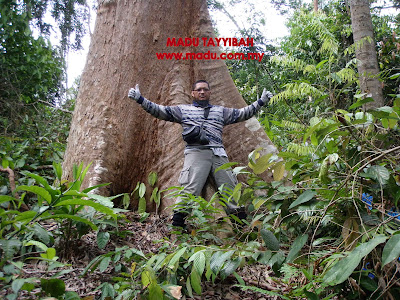 The tualang tree is a majestic emergent tree of the Southeast Asia rainforests best know for the disk shaped honeycombs which hang from its horizontal branches. Towering above the canopy the tualang can reach 250 feet, or the 30 stories in height. These trees can be found growing in the lowland forests of southern Thailand, peninsular Malaysia, northeastern Sumatra, Borneo, and Palawan. Their habitat is the primary tropical rainforest. They prefer damp locations along rivers, in valleys, and the lower slopes of hills.
Tualangs are a member of the legume family, and are related to peas. Their leaves are pinnate with 4-5 leaflets 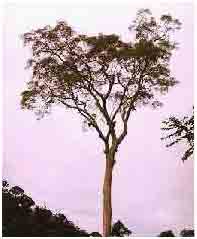 growing alternately along a central rib. They create a bright green, feathery crown. Their seeds are contained within large pods. The trunks have a smooth, silvery bark. The slippery surface discourages sun bears (Helarctos malayanus) from climbing up into the tree to reach the honey combs of the Asian rock bees (Apis dorsata). The bees prefer the tualang because it doesn't branch until almost 100 feet up. Huge buttresses support the tree at its base and keep the giants from toppling over. The sap is irritating to the skin and produces a rash.
The tualang tree is common locally but is not an abundant tree. There are no great forests of tualangs to be found. Instead solitary trees are often found standing alone in open areas because the wood is hard to cut and local people value the tualang for its honey. A standing tualang is more valuable for its honey than

The wood is brittle and often splinters when it is cut down. The wood is also incredibly hard and contains silica, making cutting it down a difficult process. With the decline of more accessible hard woods however, tualangs are being cut down for timber, and are being sold under the name of Mangaris wood. The tualang is protected under Sarawak's Wildlife Protection Bill of 1990. 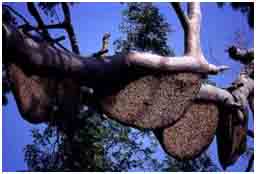 because their tremendous height provides them safety from marauders. Except for the human kind.
Local people perform a ritual honey harvest with mixed Islamic and Hindu symbolism. Singers chant ancient prayers to cajole, charm and calm the bees. On moonless nights in February and March, honey hunters climb the tualang trees with smoldering torches, banging them on the branches above the nests. This creates a rain of fire, and as the sparks fall to the ground the awakened and enraged bees take off in pursuit of the embers. The bees become disoriented and remain on the ground until dawn, leaving the nests unprotected for the honey hunters to finish their harvest. About 1,000 pounds of honey can be gathered from one tree.
A Hindu myth connected to the harvest of the honey tells of a handmaiden called Hitam Manis, or "Dark Sweetness", who fell in love with the son of the reigning Sultan. Although he returned her love, they could not get married because she was a commoner. When the Sultan discovered their love he set out to kill her. As she and some other maidens fled the palace in fear, her heart was pierced by a metal spear. Hitam Manis and her friends turned into bees and flew away into the forest.
Some years later the prince went into the forest and saw giant honey combs high in a tualang tree. He climbed up the tree, discovering the sweet honey, and called down to his servants for a knife and a bucket. But when they lowered the bucket, they found the body of the prince hacked to pieces. A voice called out from the tree that he had committed a sacrilege by using a metal implement to cut the comb like that which had killed Hitam Manis. Later a "golden shower" made by the bees restored the prince back to life. To this day no metal is used in harvesting the honey as a sign of respect to Hitam Manis. At dusk the bees fly from their nests and defecate en masse, showering the surrounding ground and foliage with a golden rain. The nitrogen-rich bee feces fertilizes the tualang that hosts the bees, giving it life as it did for the prince.
bibliography:
"Trees",
http://library.thinkquest.org/C002061/trees.htm?tqskip1=
1&tqtime=0409#tualang%20tree
"Terrestrial Ecoregions--Peninsular Malaysia"
http://www.worldwildlife.org/wildworld/profiles/terrestrial/im/
im0146_full.html (4/8/03).
Heng, Wah. "The Wildest of the Wild: Danum Valley"
http://www.thingsasian.com/goto_article/article.2049.html
Buchmann, Stephen L., Nabhan, Gary P. "Nature Explorer Article"
http://gears.tucson.ars.ag.gov/nx/malaysia/malaysia.html
di 11:17 PG